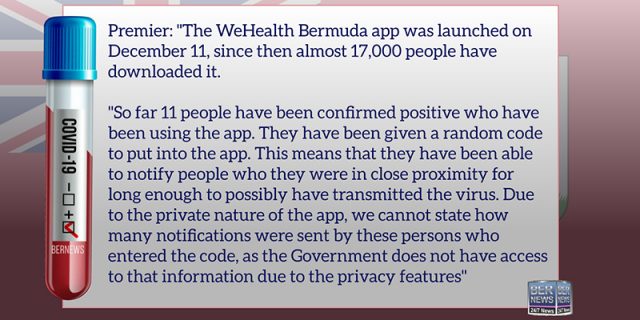 “The WeHealth Bermuda app was launched on December 11, since then almost 17,000 people have downloaded it,” Premier David Burt said, adding that “so far 11 people have been confirmed positive who have been using the app.”

Speaking at last night’s [Dec 22] press briefing, Premier Burt said, “The WeHealth Bermuda app was launched on December 11, since then almost 17,000 people have downloaded it. To those people, I say thank you.

“When smartphones that have WeHealth Bermuda installed are near each other, the app uses anonymous Bluetooth signals to determine how close together the devices were, and for how long.

“So far 11 people have been confirmed positive who have been using the app. They have been given a random code to put into the app. This means that they have been able to notify people who they were in close proximity for long enough to possibly have transmitted the virus.

“Due to the private nature of the app, we cannot state how many notifications were sent by these persons who entered the code, as the Government does not have access to that information due to the privacy features which are built into the way this application functions.

“However, it is good news to note that people are being assisted because of the use of this app. I strongly encourage everyone to download this app. You can learn more about the app by visiting www.gov.bm/wehealth or email CovidApps@Gov.bm.”