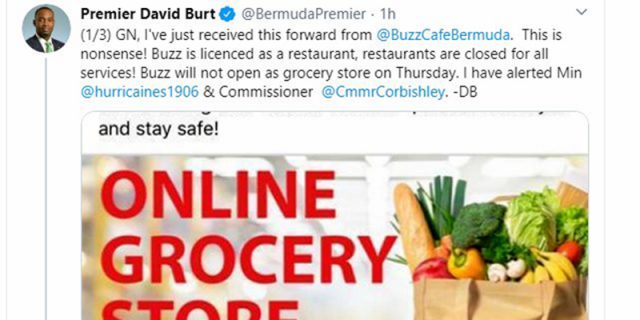 Premier David Burt had strong words for Buzz Cafe on Twitter, calling any claim they would open “nonsense”, telling them to “COOL OUT”, and tweeting that he apologises for his tone, but that this is a very serious situation and “we all have to work together to save lives.”

Premier Burt tweeted saying, “I’ve just received this forward from @BuzzCafeBermuda. This is nonsense! Buzz is licenced as a restaurant, restaurants are closed for all services! Buzz will not open as a grocery store on Thursday. I have alerted Min Caines & Commissioner Corbishley.”

In a subsequent tweet, Premier Burt said, “It is clear people do not understand how serious this situation is. Everyone if you do not have to go outside, STAY INSIDE. If you have to go out, wear a face covering. This virus has caused death around the world, and we do not want the same here. @BuzzCafeBermuda. COOL OUT!”

“Please forgive my tone & frustration, but I cannot express how serious COVID-19 is,” the Premier tweeted. “There are seniors in hospital, there are cases in Bermuda where we are still investigating the source. It is important that we take this seriously and stay home!”

The Premier then finished off by tweeting, “This is serious. We have people in the hospital, because people are NOT taking Covid-19 seriously! I am angry because we all have to work together to save lives & people are being selfish. I’m not trying to attend funerals that don’t need to happen. Guys need to stay home!”

We emailed Buzz seeking comment and will update if able. 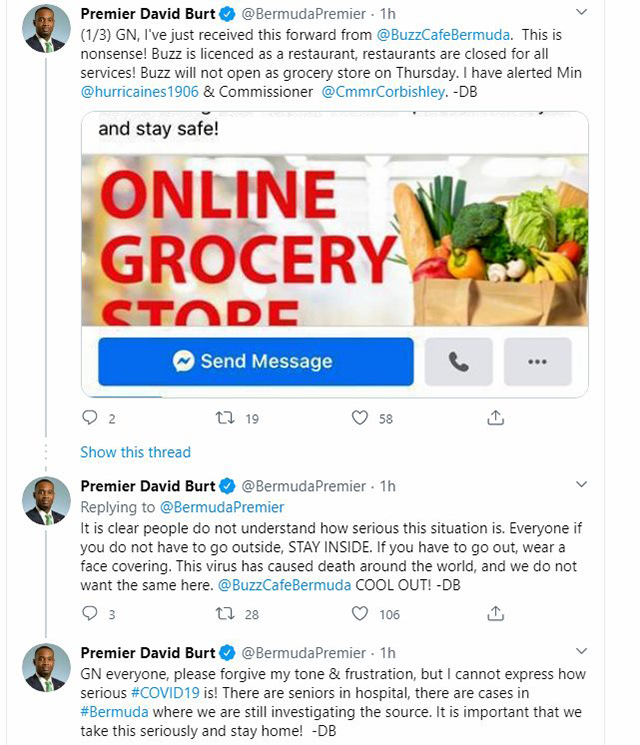 Update 10.54am: A letter from a lawyer states that Buzz did, in fact, receive confirmation from the Department of Health confirming its application had been approved to operate as grocer, and was “surprised and disappointed to then be subsequently informed by way of social media posts that it would not be permitted to open.”

The letter in full:

“In response to a recent social media post by Bernews which published copies of Premier’s tweets indicating that Buzz would not be permitted to operate as a grocery store, Buzz wishes to clarify and confirm that on Friday, the 3rd April 2020, the Department of Health accepted and processed Buzz’s application to operate as grocery store in order to provide grocery delivery service. At 3.30 p.m. on Friday, 3 April 2020, Buzz received confirmation from the Department of Health confirming its application had been approved to operate as grocer in the following terms:-

This email is to confirm that the application for an online grocery has been processed and approved for the location at 19 Bakery Lane, Pembroke, and shall now be licensed as BUZZ Grocery.

Buzz’s intention was to operate a delivery food service including some cooked food and normal grocery items or curb-side pick-up in order to support the community in these difficult times and provide a safe and efficient service that would assist in keeping residents home and safe. Having reviewed the statutory requirements to operate as grocer, Buzz was confident it complied with the regulations and submitted its application and paid the requisite fee which was accepted by the Government. As indicated above, the application to operate for a license as grocer was approved by the Government.

Buzz was surprised and disappointed to then be subsequently informed by way of social media posts that it would not be permitted to open on Thursday. Last night Buzz received a further communication from the Department of Health that its license to operate as a grocer had now been denied despite the written confirmation on Friday that its application had been approved.

Buzz will of course comply with the new directive, but it wishes the public to be made aware of the fact the Government approved it to operate as a grocer and its intent was to support safety in the community by assisting in the delivery of food and help reduce the movement of persons within the island.

We realize this is a stressful time for all and we understand the strain the Government and all of Bermuda is presently under. We do believe the matter could have been handled in a more professional matter rather than being targeted online by social media posts by persons who did not have the full facts at the time.

Buzz wishes all its valuable customers and all of Bermuda to stay safe and looks forward to serving you in the future.