[Updated] The Bermuda Freedom Alliance was scheduled to hold a rally today [July 24] on the Cabinet Building grounds, and while they did set up to hold one, as of this time it is not taking place, with the inclement weather affecting the plans.

The group had alleged that “despite being given a permit by the Parks Department,” the venue for today’s Worldwide Rally for Freedom was “changed from the Main Ring at Botanical Gardens to the Cabinet Building Lawn due to the denial of a large gathering exemption by The Department of Health.”

Speaking earlier today, spokesperson Eugene Dean said: “We made it very clear to the relevant government representatives that compliance with several of the Emergency Power mandates would put us in direct conflict with the purpose of the rally. 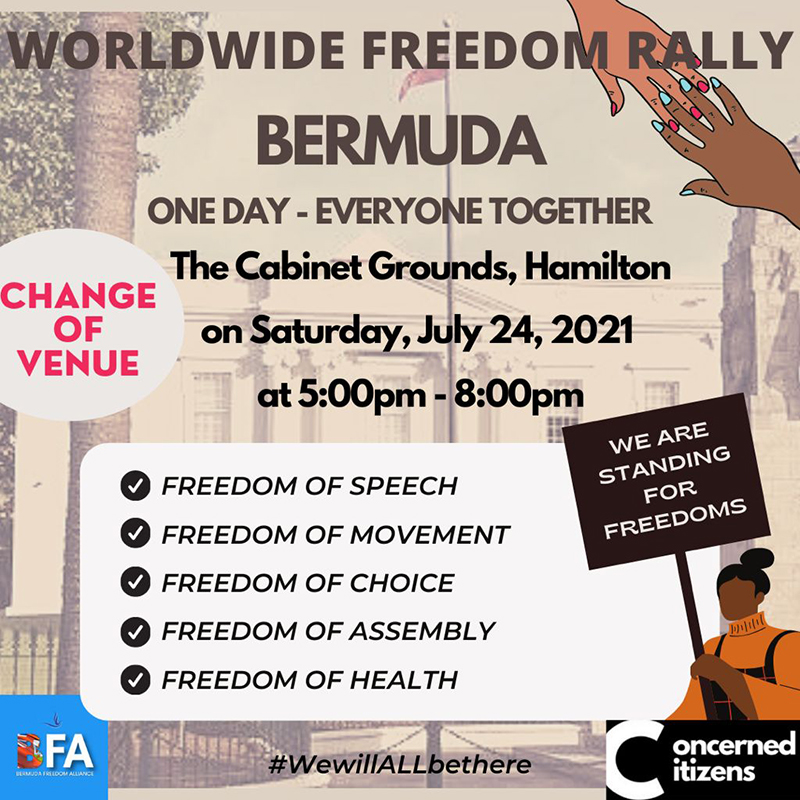 “Many people from various segments of the community have valid concerns with our handling of the pandemic in Bermuda, and, as a result, have been doing their best to cope. Though this was manageable initially, now there is a growing sense, amongst those same people, that enough is enough.

“Today is an opportunity for all who have concerns to make a statement by standing in solidarity with millions of people around the world, regardless of race, religion, gender, class or political affiliation, who are choosing to show up in person for the protection of their rights, their freedoms and their future.”

“The Worldwide Rally for Freedom will commence at 5 pm and finish at 8 pm, All Bermudians and Bermudian residents are invited to attend the rally to show their collective discontent with the discriminatory measures, that have used fear and intimidation, to divide our people, cripple our economy, restrict our movement, and hinder our ability to provide for our loved ones and ourselves.” said Mr Dean.