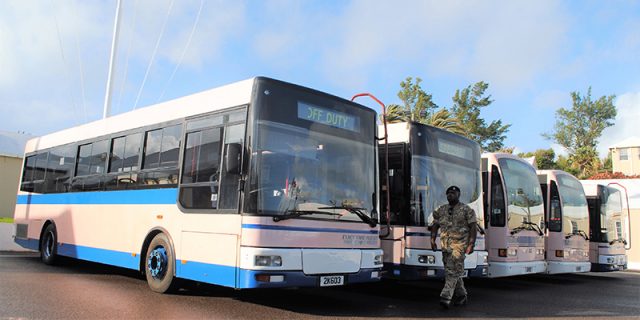 Royal Bermuda Regiment soldiers have completed their first weekend since “shelter in place” rules to combat Covid-19 were introduced.

The new regime – a 24-hour lockdown except for essential trips – was enforced by RBR manned checkpoints and mobile patrols over the hours of darkness.

Major Beasley explained: “We will be providing the transport from the airport to the quarantine locations and we may also be asked to assist with the cargo of personal protective equipment and Covid-19 test kits.”

Private Chanara Smith-Rookes, 21, from St George’s, admitted it was tough leaving family behind when she was called up for duty.

But she said: “We are helping the country. The vehicle checkpoints are an important control to deter people from coming out and helps those who do need to be out to get to work.

“The whole situation is a bit scary, but I was happy to come out on the front line, help out and protect Bermuda.”

She added she had spent the previous two weeks at home because of the shutdown and was sure her family was secure.

Pte Smith-Rookes said: “After that, I felt a bit useless – now I’ve got a purpose.”

Soldiers have also transported returned residents and people leaving the island on emergency flights to and from the island and checked supermarkets to make sure queues are in line with social distancing rules and orderly.

They are also transporting people with symptoms of the disease from their homes to test centres and taking essential staff to and from the King Edward VII Memorial Hospital.

RBR medics are keeping an eye on the health of soldiers and on standby to assist at the hospital and airport if needed.

Private Kyle Packwood, 20, a painter from St George’s and a former St John Ambulance first aider, said: “The soldiers are doing well – they’re managing the social distancing in camp and outside – but some of them need to drink more water.”

Private Jamel Easton, who works at Bermuda Air Conditioning, added his section had processed up to 70 vehicles through checkpoints near the Arboretum in Devonshire and close to the airport in St George’s.

The 28-year-old from Devonshire said: “Everybody is happy to cooperate, although some get a little unsettled because they’re not used to it.”

He added: “I’m doing something useful I am in a tent instead of barracks for social distancing, which I didn’t expect – but we are all managing.”

Major Preston Gill, commander of the RBR Covid-19 response team, said: “The population is reassured by seeing the uniformed services out there.

“A lot of the soldiers were a bit apprehensive at first – they know they’re dealing with a pandemic and were worried about leaving their families, but they all made the personal sacrifice to be here and do their duty.

“Our skills are adapted easily to this situation and to helping make sure the emergency orders are adhered to.”

Major Beasley added: “The operation has gone really quite well. There was good communication with the public beforehand by the Government, so they knew what to expect and we have seen very few people breaching the rules.

“Morale is fantastic. All our soldiers understand the important role they have and this is one of the situations we train for.

“We train for the worst and hope for the best and it’s rewarding to realise the role we are playing to secure the safety of Bermuda.”

Major Beasley said: “Like other services, we’re taking on a significant risk, but we evaluate the risk and use the appropriate measures to make sure our soldiers are not exposed unnecessarily.”

He added: “Major Kenneth Wainwright, Sergeant Major Keyon Woods, and all members of the resilience and logistics team have done an excellent job in the numerous tasks required in preparing and operating the camp for operations within the stringent guidelines.

“Their team has secured our supply lines, provided troops with the resources they need and fed the exhausted troops.

“They have also ensured that the soldiers are decontaminated when they return from outside the camp, washed uniforms throughout the day and constantly sanitised equipment.”