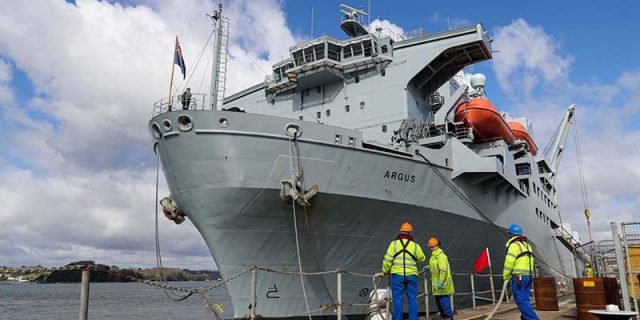 RFA Argus will be anchored in Bermuda’s waters from April 12 to 13 to load provisions before continuing on to the Caribbean.

A spokesperson said, “Government House today announced that RFA Argus, a ship of the Royal Fleet Auxiliary, will be anchored in Bermuda’s waters from 12 to 13 April. The purpose of the anchorage is to load provisions before continuing on to the Caribbean. This will be done without any direct contact between shore personnel and the ship’s crew.

“RFA Argus will be positioned in the Caribbean as part of the UK’s hurricane preparedness support but due to the COVID-19 pandemic the vessel was deployed early to provide additional resilience to the Overseas Territories in the region.

“While here, two helicopters from RFA Argus will conduct familiarisation flights over a number of helicopter landing sites across the island. This was last done in 2014 and is a key part of the hurricane preparedness plan for Bermuda.

“No personnel from the two helicopters will be granted permission to physically land on Bermuda during the brief stopover.”