The Governor has officially declared a ‘State of Emergency’ for Bermuda due to Covid-19, with the official proclamation saying it is an “unprecedented and severe threat.”

The Official Proclamation, which was dated April 1st, said, “Covid-19 is an unprecedented and severe threat to public health in Bermuda, therefore in accordance with section 14[3] of the Constitution, I the Governor, acting after consultation with the Premier, declare that a state of emergency exists in Bermuda.”

While the proclamation was officially declared by the Governor, which is policy as we are a Territory, it was done at the request of Premier David Burt, who previously said, “Following yesterday’s meeting of Cabinet and with their full support, I met this morning with His Excellency the Governor and requested that he exercise his authority under section 14[3] of the Constitution to declare a state of emergency for Bermuda based on what is now necessary to intensify the fight against this virus.” 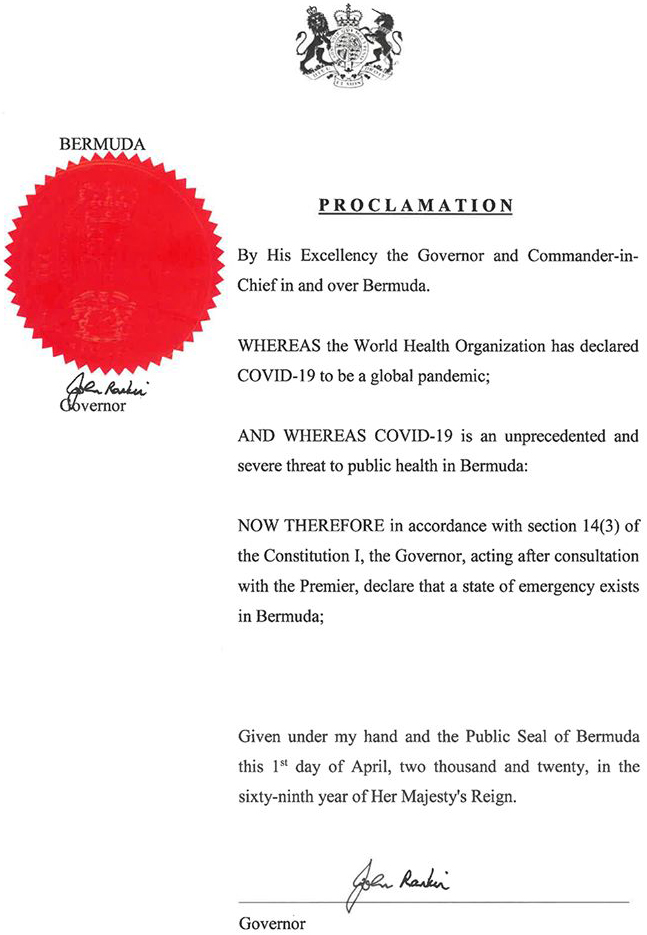 The section of the Constitution cited — section 14[3] — reads as follows:

“Provisions For Time Of War Or Emergency

[1] “This section applies to any period when—

[2] “Nothing contained in or done under the authority of any law shall be held to be inconsistent with or in contravention of section 5, any provision of section 6 other than subsections [4] and [6] thereof, or any provision of sections 7 to 12 [inclusive] of this Constitution to the extent that the law in question makes in relation to any period to which this section applies provision, or authorises the doing during any such period of anything, which is reasonably justifiable in the circumstances of any situation arising or existing during that period for the purpose of dealing with that situation.

[3] “The Governor may, by proclamation published in the Gazette, declare that a state of emergency exists for the purposes of this section.

[4] “Where any proclamation of emergency has been made, copies thereof shall as soon as is practicable be laid before both Houses, and if for any cause those Houses are not due to meet within five days of the making of that proclamation the Governor shall, by proclamation published in the Gazette, summon them to meet within that period and they shall accordingly meet and sit upon the day appointed by the proclamation and shall continue to sit and act as if they had stood adjourned or prorogued to that day: